There’s no prize for guessing the topic of the year, hashtag #COVID19 took out the number one spot for what most Aussies were tweeting about.
#COVID19 has been tweeted nearly 400 million times around the world.
Usually the front runner, #auspol was knocked off pole position for the first time in years.
Other hashtags #blacklivesmatter, #climatechange, #ausopen, #bushfires, #AFL, #BTS, #mentalhealth and #gaming also topped the Aussie list.
The most popular tweet for Australians came after the passing of actor Chadwick Boseman. 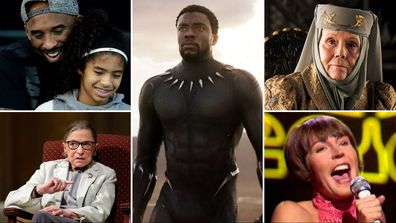 Deaths of 2020: The high-profile people we lost this year
View Gallery
The news was retweeted 2.1 million times and seven and a half million users hit the like button around the world.
P!nk’s $500,000 donation to assist with the bushfires came in second, it’s since been labelled Australia’s Golden Tweet by Twitter, receiving more than 226,000 likes.
Aussie’s love their reality TV, MasterChef was most tweeted about show with the hashtag #masterchefau.
Married at First Sight was a close second, with users tweeting #mafs to dissect the drama.
Animal Crossing on Nintendo Switch was the most popular video game on Twitter this year, and the launch of the Nintendo Switch lite was one of the most talked about topics.
Sharing gaming content across gaming platforms saw a rise, with the hashtags #ps4share and #xboxshare rallying gaming communities.
Australia’s favourite celebrities included singers Ariana Grande, Lady Gaga, Justin Bieber and Taylor Swift. Kanye West also made the list, alongside all of the One Direction members Louis Tomlinson, Harry Styles, Liam Payne and Niall Horan.
Sydney pop group 5 Seconds of Summer came in at number four.