Valeria Yezhova sits at a little folding table outside the sliding doors of a Kyiv shopping centre on a warm afternoon, waiting for someone to sit down in the camping chair across from her and try to give her a run for her money on the checkers board on the table.
She doesn’t have to wait long. The sign on the table reads “we are helping the Ukrainian army” and the shoppers in this residential neighbourhood seem happy to drop a few hryvnia — the Ukrainian national currency — into her shoebox, where the pile of bills is quickly growing.
What most who walk past — or sit down to play — don’t appear to realise is that Valeria hasn’t lost a single game in the 10 days that she’s been out here.
READ MORE: Millions swelter as UK endures its first extreme heat warning
If she weren’t raising money for a good cause she could be accused of being a hustler, since the 10-year-old is actually the world champion for her age in checkers, also known as draughts, having won the title last summer.
“Valeria asked me how she could help the Ukrainian army,” says Valeria’s mother Liubov, who is standing off to the side with Victor Kovalenko, the man who has coached Valeria in checkers since she was seven.
“I asked her what she does best, she replied that she is good at checkers. That’s how this idea came about.”
“Good at checkers” means dispatching with her street opponents in minutes, never hesitating as she mercilessly takes black pieces off the board as her white pieces advance.
The defeated challengers — kids, women and men of all ages — drop however much they like into the box and, increasingly, ask Valeria for a picture thanks to her growing national notoriety.
READ MORE: Sydney boy’s presumed death reignites calls to get Aussie kids out of Syria

After spending over a week outside the shopping centre Valeria had raised the equivalent of US$700 ($1027). She decided to donate the money to a foundation run by celebrity activist Serhiy Prytula, who has been raising money to buy humanitarian aid and equipment for the Ukrainian military. An online video shows Prytula choking up when Valeria presents him with the stacks of bills.
The moment spread quickly on the internet and very soon people were writing on Valeria’s mother’s Facebook page, asking where they would be so they could play the young phenomenon.
“Valeria is already a legend here,” said Dmitro Penzev, after losing his game. His wife had spotted Yezhova at the shopping centre and called Penzev who rushed over from work.
“You would rather lose to her, she is doing a great job helping the Ukrainian army. She has probably touched the whole of Ukraine.”
READ MORE: Fears for grandmother missing weeks after car found crashed and abandoned
Word has already reached the front line; a woman who saw Valeria showed her a photo of her husband’s unit thanking Valeria for what she’s doing for them.
“It was a strange feeling,” Valeria said.
“I guess I felt gratitude to the military that they protect us and despite the fact that I do much less than them they want to thank me.”
As Valeria played, a store security guard came out to say air raid sirens were sounding elsewhere in the city and they were temporarily closing the doors for safety.
“Of course I would like to live a normal life, but during the war it is difficult,” she said.
“This is an unpleasant feeling, there are a lot of negative emotions.”
Valeria’s family spent the first week of the war in a school basement as Russian forces occupied a neighbourhood outside Kyiv where her grandparents live. They fled to the western city of Lviv as the fighting intensified but eventually returned to the capital.
READ MORE: Man who fled Victoria after killing teenage pedestrian released on bail in India

Valeria’s success and growing fame has encouraged others in her checkers club to follow her lead and get out onto the streets to raise money for Ukraine’s military campaign.
She is both the European and world champion for her age group, the under-10s. Next month she will return to Turkey for the European youth championship but this time doesn’t expect to do as well since she’ll be facing players up to 13 years old.
On this 10th day of sitting at her folding table Valeria takes a moment to count the cash after just over an hour and a half of play. It’s almost US$150 ($220), a record haul, which will soon go to the Serhiy Prytula Foundation. 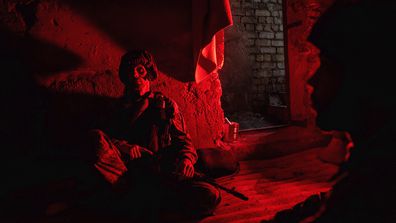 Deadly Russian barrages claim more civilian lives
View Gallery
But before she leaves for the day, 18-year-old Mykola Sorokin asks for a game. They play two, each as uneventful as all the others that proceeded that day.
“These children are a great example of how we can help each other, a good example that Russia can’t beat us,” he says after his loss.
Running into Yezhova was a “dream come true”, he adds, and in terms of skill “I’m the ground and she’s the sky”.